The Lesson of the time 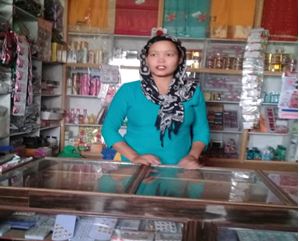 When Basanti Bhandari Yadav decided to engage in inter-caste marriage, her family rejected her. Her in-laws did not allow her to enter the house. The society mocked her saying that how could a Bhandari marry a Yadav.

She had to stay in a small thatched house along with her husband for long time. Besides, her in laws did not give her any parental land to till.

As a result both she and her husband started earning their bread and butter through daily wages. The days were very difficult for Basanti as her husband did not have any permanent job. No one in the village gave them any loans. She would weep for hours together in evening to see her miserable condition.

After the birth of one son and one daughter their days were worsened. So, her husband had to go abroad for foreign employment. Then the problem of how to repay the loan taken for her husband started troubling her besides, the problem of food, clothes and education for her children.

Then, she thought of doing some business to come out of this critical financial situation. But who would give her the loan without collateral.

One day, while she was doing her daily wages, she saw some women sitting in a meeting wearing a dress. During the interrogation, she found out that this was a meeting of the Aatmanirbhar LBS (former Rural Women's Development Center (RWDC) which gave easy loans to those who wanted to do something with little savings in the group.

After that she went to Bela Rural Municipality and joined Pragati Mahila Utthan Kendra, at Center No. 3, formed in Ward No. 2 and took a loan of Rs 10,000. However, this amount of money was not sufficient for her. Again she took a loan of Rs 8000 to start a cosmetic shop.

With the money earned by her husband, she continued to repay the loan of land lords and expanded the shop with the money she earned. Her earnings increased. She even opened a tailors shop. She also conducted sewing training as per the demand of the community. She has built her own house too with her own income.

She has set up a cosmetic shop at home as well as a sewing shop and a sewing training center. Nowadays, she doesn't have time for a moment.

During the festivals of Dashain, Tihar, and Tij, she doesn’t even have time to eat. She says that the Aatmanirbhar LBS (former Rural Women Development Center-RWDC) has a big hand in making her business flourish and let her achieve her present status of living standard.

Currently, he has taken a loan of Rs 300,000 without collateral. Her mother-in-laws also treat her well at home. Today, she has succeeded in revealing and establishing her own identity to the society. Even the local bodies nowadays invite her to be sewing instructor.